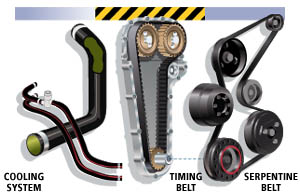 Exposure to heat, vibration and contamination makes belts and hoses wear out faster than any other components in your car. That's why regular inspections are so important. Here are the belt and hose types in your car, along with their applications.

The timing belt keeps the moving components of your engine working together.  A timing belt failure is the most common cause of catastrophic engine failure in high mileage cars.  Replacing the timing belt and its system of pulleys and tensioners is basic maintenance, like changing the oil.  Your automobiles timing components should be changed every 60,000 to 80,000 miles depending on the maufacturers specifications.  The timing system consists of:

The hoses that convey your car's fluids are made of two rubber layers with a layer of fabric in between. Typical hoses include: